In the dark period of the day, you simply can not do anything without additional light sources. Solar-powered street lighting will not only make our life much easier, but also but also prevent the emergence of various unexpected situations. After all, it is necessary to think about your own safety first. In addition, such street lighting as lanterns or luminaires significantly decorates and adorns the landscape design.

Solar-powered lighting is used in cases where it is impossible to carry through standard wires from the power distribution point. Or their presence spoils the appearance of the surrounding exterior, while disrupting the whole aesthetics of the surrounding area. With these sources of light for street illumination you can greatly improve the overall kind of place where they are located, giving it a special fabulousness and charm in the dark.

Most often, an autonomous street lighting with solar batteries are placed in the following locations:

The operating principle of the streetlights on solar batteries is quite simple. In daylight they strenuously accumulate energy while staying at the same time in a state of rest. But as soon as dusk sets in, they immediately step up their work and begin to actively emit light. This feature of them arises due to special sensors which are located in the construction of street lighting. The process of switching on and off happens strictly automatically.

Also there's a wide range of choices of autonomous lighting in our store's stock: 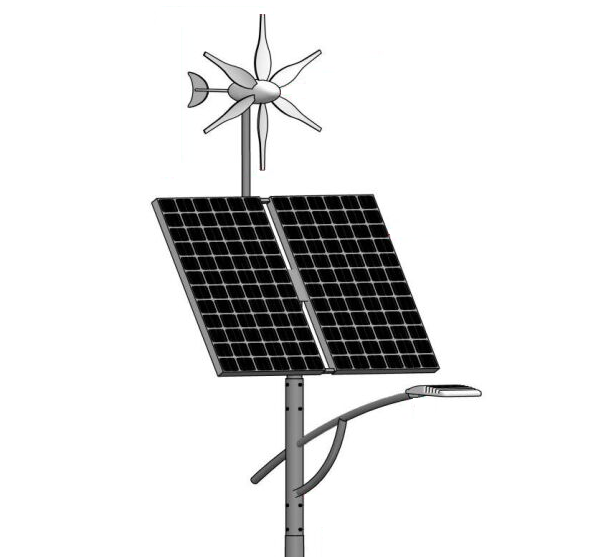 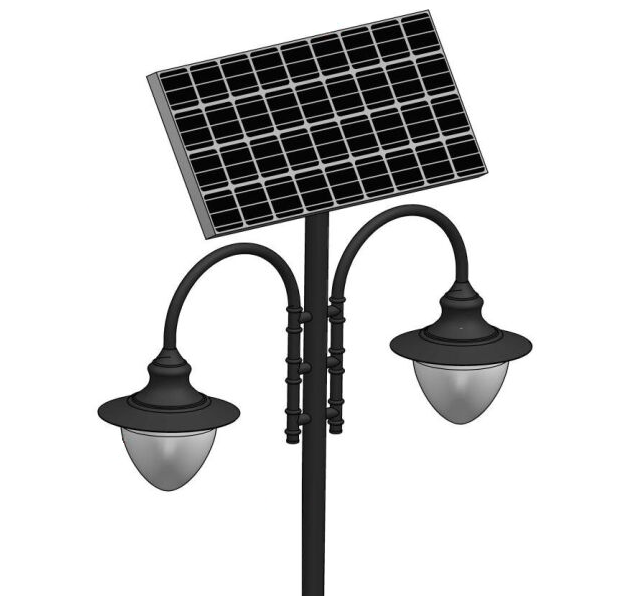 The principle of operation of solar-powered lights

Street lighting devices on solar batteries have a relatively simple design. They are powered by accumulatory nickel-cadmium battery. Its power is about 700 mA per hour on the avarage. During the day, it is in it that solar energy accrues and stores up. At nightfall, it will automatically turns on. Light is produced by LED diodes with about 0.06W of power.

Solar-powered streetlights can successfully serve up to 100,000 hours. Modern models of such facilities are protected against corrosion, dust formation, as well as atmospheric precipitation and temperature differences. The protection index is indicated on the lamp box or its housing. It is denoted by the letters «IP», near which there are also specific numbers. The larger they are, the higher the degree of protection of a solar-powered outdoor lighting device.

Each such luminaire works on an individual principle. The height of the light that it reproduces is up to ten centimeters. Autonomous solar-powered outdoor lights work until there is enough charge in their battery. If the device successfully accumulated energy during daylight hours, then it will be successfully giving it away all night. If there wasn't enough sunlight outside, most likely it will turn off as soon as the battery runs out.

Thus, it is very important to pay special attention to the location of solar-powered street lighting. These devices must be placed in such spots where sunlight will actively fall on them. This will ensure successful operation for the maximum number of cycles. It is also better to choose such lamps that will be with a motion sensor. If available, then they will only be activated if someone passes by the appliance. Therefore, energy consumption is going to be notably reduced, while the cycle of exploitation of lamps for street lighting on solar panels is going to extend. 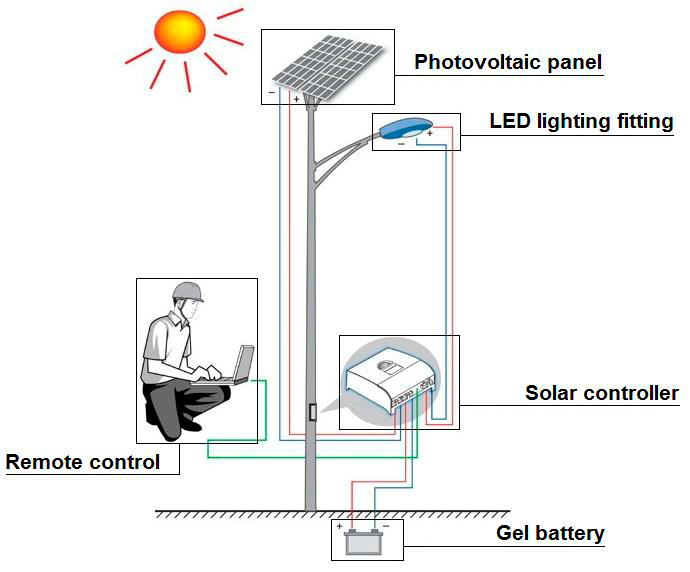 Autonomous light fixtures that operate from solar panels have the following design:

Solar-powered outdoor luminaires of a standard design perfectly cope with significant temperature differences and can successfully function at temperatures from -50° C to +40° C. The power of their battery is completely dependent on the manufacturer of the appliances.

Most often, such structures are classified directly by the method of installation. They are divided into three types:

Solar-powered wall luminaires for street lighting are mounted on the walls in residential and non-residential buildings. Frequently, they are equipped with a special sensor that responds to the motion. Thanks to such lights, emphasis is placed on certain parts of the facade or it makes it easier to overcome problem places in the dark. When placing such fixtures, great attention should be paid to the sunlight exposure on them. If there's not sufficient sunlight to fall down on the surface, then the solar-powered street lighting appliance will not be able to perform its work functions efficiently and fully charge.

Pendant lights are “hung up” on certain structures. This could be a porch, an arbor or trees in the garden. When installing these solar-powered street lighting devices, it is worth considering that if sunlight exposure to them is minimal or almost zero, then it is better to change the location.

Solar-powered floor/ground street lights are placed on special stands that are fixed to the ground.От высоты подставки зависит зона освещения прибора. In most cases, the height of such structures does not exceed one and a half meters.

Floor stand-alone lamps are distinguished by the next two types:

Solar-powered street lighting appliances in the form of tiles are made of composite materials or durable glass, not subjected to impacts (hits). Their body is completely transparent or matte. Such lamps fit pretty organically even into the most intricate exterior.

The advantages of using appliances for street lighting with solar batteries

These autonomous lamps and lanterns have many benefits for their owners. The most significant among them are:

It is also worth noting that modern models of solar-powered street lighting devices are made of sufficiently long-lasting and reliable materials not subjected to corrosion and standard physical wearout. However, their price is quite affordable for most buyers.

Disadvantages of using appliances for street lighting with solar batteries

Actually, there are very few of them, because with every year the designers of modern appliances of this kind are increasingly improving their idea and concept, making them more and more high-quality and generative. The disadvantages include the following nuances:

In respect to these nuances, we can boldly say that solar-powered street lighting has much more “pluses” than “minuses”. Thanks to this, every year such devices are becoming progressively popular among consumers who want to make the design of their nearby territory more imposing and original.

The secrets of exploitation of solar-powered street lighting appliances

In order for your autonomous lamps that you put on the street to successfully carry out their current functions, it is necessary to stick to elementary rules for their operation. You should regularly wipe the devices out from the dust and mud and check their working condition. In the cold season, it is better to demount the solar-powered street lighting fixtures and place them in a dry place with room temperature. In this way they will be able to successfully function longer.

To check the stand-alone luminaire for the fact of its usableness, it is necessary to place it in a dark space after recharging it from the sun. Or you can just close with your hand the part that receives solar energy. If the solar-powered street lighting device is in order, it will immediately glow.

If necessary, such devices can be organically added with special sensors that respond to movement. This will significantly prolong the life of solar-powered street lighting.

The managers of the STOLB street light online store are always happy to assist you with choosing suitable lighting device in a very fast and effective way!

Also there's available a broad range of choices of autonomous lighting in the stock of our store:

Поділитись
Поділитись
Обсуждение
Other records
Up
Login Check in
Login with
Password recovery
Enter the email address you provided during registration and we will send you a password recovery email.
Basket